Home » Marketing in Metaverse: For better or for Verse?

Marketing in Metaverse: For better or for Verse? 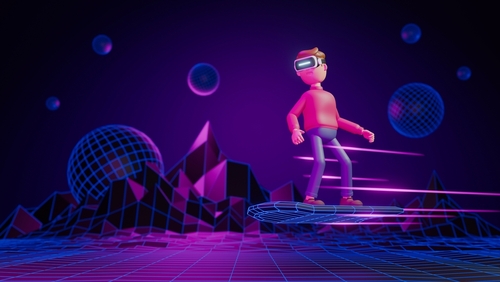 People working in new age industries are obsessed with the new buzz words, technologies, ideas. Who knows what will be the next big thing? The Metaverse buzz just doesn’t seem to be going away.

The Metaverse is what Gartner calls a ‘digital twin’ of the real world. The Metaverse needs to be ‘built’ with digital twins of different objects – buildings, trees, wildlife, cars, and people. The end objective is that people will actually transact and do business on it. To be honest a lot of it is already happening. Having been in the marketing, digital, martech and data space for so long, I was a little less excited about Metaverse to start with. The reason for that is ‘Second Life’, a remarkably similar idea was launched way back in June 2003 by Philip Rosedale. You can watch the launch video here – https://www.youtube.com/watch?v=DOv2sNUZgD8&t=54s

In fact, Second Life was backed by some noticeably big names including Jeff Bezos and eBay founder Pierre Omidyar. Initially it was phenomenally successful and crossed the ten million user mark in 2007. Big numbers in those days. Some of the biggest brands including Coke, McDonalds backed it.

Virtual life Avatars on second life were in vogue way before Metaverse, in 2003, yours truly being one of them. There are many reasons why Second Life failed. (Though it is not a failure in a classic sense. Linden Labs, who own it still does generate tens of millions of dollars in annual revenue and it continues to attract close to a million users every month.) As is the case with lot of products and ideas in the tech space, I think it was way ahead of its time, and the technology, functionality and usability issues did not enhance the experience.

However, with all the learnings of over 20 years, maybe the time is right for Metaverse. The technology, including the rapid move towards 5G, AR, VR,  great UI and UX and the Gen Z completely hooked to their devices it has the potential to be the next big thing, if it already isn’t. It helped that Mark Zuckerberg went all in with it in December 2021, Facebook rebranded itself as Meta, and he declared his ambition to “help bring the metaverse to life.” They have already invested $10 billion on this in the last 12 months.

We all know about the easy money in 2021 and the timing really helped even metaverse-related companies to raise upwards of a further $10 billion! By 2030, Metaverse is likely to be a $13 trillion opportunity, according to Citi Global Insights. In the past 12 months, Epic Games, the makers of Fortnite—has raised $3 billion for Metaverse. It announced a partnership with LEGO to build a metaverse for kids. I am tracking this because my son is already a veteran on Roblox, Roblox grew its daily active users by about 10 million in 2021. At RDC, its annual developer event that just happened on Sept. 9, the company highlighted new features designed to improve the platform, with a focus on expanding the platform to offer more sophisticated experiences to age groups beyond the 13-and-under kids that has long been its bread and butter. Roblox and many other players are clearly preparing themselves to ride the Metaverse wave. Platforms like Roblox, Decentraland, Zepeto, and The Sandbox have all clearly emerged as Metaverse platforms. The Decentraland platform is creating virtual realtors, enabling users to buy, sell, and build businesses upon parcels of virtual land, earning a digital money called “Mana.”

Metaverse, a term originally coined by author Neal Stephenson in 1992 to describe a future world of virtual reality, is generally considered as a network of 3-D virtual worlds where people can interact, do business, and forge social connections through their virtual selves. The metaverse will make digital experiences much more immersive, interactive, and inclusive. The metaverse brings together a range of technologies from cloud computing to artificial intelligence (AI), blockchain, cryptocurrencies, cybersecurity, the internet of things (IoT), virtual reality (VR), augmented reality (AR), digital twins, and AdTech. It is a virtual economy, built on cryptocurrency (mostly) and digital goods and assets, including nonfungible tokens (NFTs).

Marketeers seem to be overly excited about Metaverse. There have been some initial successes like during Gucci’s ‘Gucci Garden’ virtual exhibition last year, a virtual version of its highly coveted Dionysus Bag with Bee, sold for an astounding $4115, when one of my colleagues in office mentioned this, I was flabbergasted! The cost of the bag in the real world is only $3400. A few months back emboldened by its success, Gucci released 500 “Superguccis”, a white ceramic figurine and a digital artwork. They were priced at nearly $5,000, and swiftly sold out. A one-of-a-kind electronic Dolce & Gabbana tiara fetched over $300,000 at another digital auction.

Undoubtedly, the Metaverse looks like a huge opportunity for marketeers. Indian brands too have caught on to the Metaverse – Tanishq launched its bridal collection on Metaverse under the ‘Rivaah’ brand; participants could try out the piece in ‘Rivaahverse’ using QR codes on mobile phones. This Valentine’s Day, Mondelez India created a metaverse experience of a dinner date on the moon. Through augmented reality (AR), the couples were able to step into a portal and stroll around on the moon. In IPL 2022, Nestle India was on Metaverse through its chocolate brand, Munch. It launched limited edition packs featuring players from IPL franchises. A scan of Munch packs takes the consumers into an AR experience of cricket games and meeting digital avatars of players. Fans can click pictures with players through attractive AR filters.

Of course, these are early days and brands will test the waters before committing big time. However, my recommendation to marketeers always has been that have a marketing strategy based on business first and the platform strategy must be a part of it, if it helps you meet your objectives. New platforms, besides needing a thought through strategy, need careful calibration of financial and personnel resources. For better or for verse, marketeers must dive right into the Metaverse!